The English word "finger" has two senses, even in the context of appendages of a single typical human hand:

Linguistically, it appears that the original sense was the broader of these two: penkwe-ros (also rendered as penqrós) was, in the inferred Proto-Indo-European language, a suffixed form of penkwe (or penqe), which has given rise to many Indo-European-family words (tens of them defined in English dictionaries) that involve or flow from concepts of fiveness.

The thumb shares the following with each of the other four fingers:

The thumb contrasts with each of the other four by being the only digit that:

and hence the etymology of the word: "tum" is Proto-Indo-European for "swelling" (cf "tumour" and "thigh") since the thumb is the stoutest of the fingers. 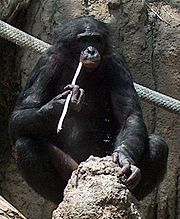 In humans, opposition and apposition are two movements unique to the thumb, but these words are not synonyms:

Primatologists and hand research pioneers John and Prudence Napier defined opposition as: "A movement by which the pulp surface of the thumb is placed squarely in contact with - or diametrically opposite to - the terminal pads of one or all of the remaining digits." For this true, pulp-to-pulp opposition to be possible, the thumb must rotate about its long axis (at the carpometacarpal joint).<ref name="Primates-FAQ">{{#invoke:citation/CS1|citation |CitationClass=web }}</ref> Arguably, this definition was chosen to underline what is unique to the human thumb.

Anatomists and other researchers focused exclusively on human anatomy, on the other hand, tend to elaborate this definition in various ways and, consequently, there are hundreds of definitions.<ref name="vanNierop-2008">{{#invoke:Footnotes|harvard_citation_no_bracket}}</ref> Some anatomists<ref name="Brownetal-2004">{{#invoke:Footnotes|harvard_citation_no_bracket}}</ref> restrict opposition to when the thumb is approximated to the fifth digit (little finger) and refer to other approximations between the thumb and other digits as apposition. To anatomists, this makes sense as two intrinsic hand muscles are named for this specific movement (the opponens pollicis and opponens digiti minimi respectively).

Other researchers use another definition,<ref name="vanNierop-2008" /> referring to opposition-apposition as the transition between flexion-abduction and extension-adduction; the side of the distal thumb phalanx thus approximated to the palm or the hand's radial side (side of index finger) during apposition and the pulp or "palmar" side of the distal thumb phalanx approximated to either the palm or other digits during opposition.

Moving a limb back to its neutral position is called reposition and a rotary movement is referred to as circumduction.