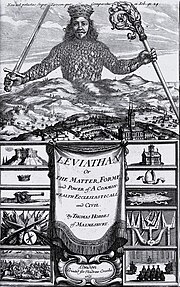 In Leviathan, Hobbes set out his doctrine of the foundation of states and legitimate governments and creating an objective science of morality. This gave rise to social contract theory. Leviathan was written during the English Civil War; much of the book is occupied with demonstrating the necessity of a strong central authority to avoid the evil of discord and civil war.

Beginning from a mechanistic understanding of human beings and the passions, Hobbes postulates what life would be like without government, a condition which he calls the state of nature; much of this was based on Hugo Grotius' works. In that state, each person would have a right, or license, to everything in the world. This, Hobbes argues, would lead to a "war of all against all" (bellum omnium contra omnes). The description contains what has been called one of the best known passages in English philosophy, which describes the natural state mankind would be in, were it not for political community: <ref>{{#invoke:citation/CS1|citation |CitationClass=book }}</ref>

In such condition, there is no place for industry; because the fruit thereof is uncertain: and consequently no culture of the earth; no navigation, nor use of the commodities that may be imported by sea; no commodious building; no instruments of moving, and removing, such things as require much force; no knowledge of the face of the earth; no account of time; no arts; no letters; no society; and which is worst of all, continual fear, and danger of violent death; and the life of man, solitary, poor, nasty, brutish, and short.<ref>{{#invoke:citation/CS1|citation

In such a state, people fear death, and lack both the things necessary to commodious living, and the hope of being able to toil to obtain them. So in order to avoid it people accede to a social contract and establish a civil society. According to Hobbes, society is a population beneath a sovereign authority, to whom all individuals in that society cede some rights for the sake of protection. Any power exercised by this authority can not be resisted because the protector's sovereign power derives from individuals' surrendering their own sovereign power for protection. The individuals are thereby the authors of all decisions made by the sovereign.<ref>{{#invoke:citation/CS1|citation |CitationClass=book }}</ref> "he that complaineth of injury from his sovereign complaineth that whereof he himself is the author, and therefore ought not to accuse any man but himself, no nor himself of injury because to do injury to one's self is impossible". There is no doctrine of separation of powers in Hobbes's discussion.<ref>"1000 Makers of the Millennium", page 42. Dorling Kindersley, 1999</ref> According to Hobbes, the sovereign must control civil, military, judicial, and ecclesiastical powers.