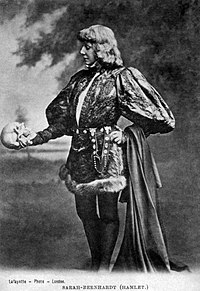 Sarah Bernhardt as Hamlet, in 1899

{{#invoke:Sidebar|sidebar}} Theatre or theater<ref>Originally spelled theatre and teatre, from around 1550 to 1700 or later, the most common spelling was theater. Between 1720 and 1750, theater was dropped in British English, but was either retained or revived in American English (Oxford English Dictionary, 2nd edition, 2009, CD-ROM: ISBN 9780199563838). Recent dictionaries of American English list theatre as a less common variant, e.g., Random House Webster's College Dictionary (1991); The American Heritage Dictionary of the English Language, 4th edition (2006); New Oxford American Dictionary, third edition (2010); Merriam-Webster Dictionary (2011).</ref> is a collaborative form of fine art that uses live performers to present the experience of a real or imagined event before a live audience in a specific place, often a stage. The performers may communicate this experience to the audience through combinations of gesture, speech, song, music, and dance. Elements of art and stagecraft are used to enhance the physicality, presence and immediacy of the experience.<ref>M. Carlson, Journal of Dramatic Theory and Criticism, [1], 2011</ref> The specific place of the performance is also named by the word "theatre" as derived from the Ancient Greek θέατρον (théatron, "a place for viewing"), itself from θεάομαι (theáomai, "to see", "to watch", "to observe").

Modern Western theatre comes, in large measure, from ancient Greek drama, from which it borrows technical terminology, classification into genres, and many of its themes, stock characters, and plot elements. Theatre artist Patrice Pavis defines theatricality, theatrical language, stage writing, and the specificity of theatre as synonymous expressions that differentiate theatre from the other performing arts, literature, and the arts in general.<ref>Pavis (1998, 345). Drawing on the "semeiotics" of Charles Sanders Peirce, Pavis goes on to suggest that "the specificity of theatrical signs may lie in their ability to use the three possible functions of signs: as icon (mimetically), as index (in the situation of enunciation), or as symbol (as a semiological system in the fictional mode). In effect, theatre makes the sources of the words visual and concrete: it indicates and incarnates a fictional world by means of signs, such that by the end of the process of signification and symbolization the spectator has reconstructed a theoretical and aesthetic model that accounts for the dramatic universe" (1998, 346).</ref>

Theatre today, broadly defined, includes performances of plays and musicals. There are connections between theatre and the art forms of ballet, opera (which uses staged, costumed performances with singing and orchestral accompaniment) and various other forms.