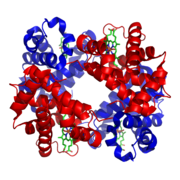 An example of a subunit, human hemoglobin. The protein's α and β subunits are coloured red and blue.

A tetramer ({{#invoke:IPAc-en|main}}) (tetra-, "four" + -mer, "parts") is an oligomer formed from four monomers or protein subunits. The associated propriety is called tetramery. An example is kobophenol A, a molecule formed from four stilbenoids monomers.

In biochemistry, it similarly refers to a biomolecule formed of four units, that are the same (homotetramer), i.e. as in Concanavalin A or different (heterotetramer), i.e. as in hemoglobin. Hemoglobin has 4 similar sub-units while immunoglobulins have 2 very different sub-units. The different sub-units may have each their own activity, such as binding biotin in avidin tetramers, or have a common biological property, such as the allosteric binding of oxygen in hemoglobin.