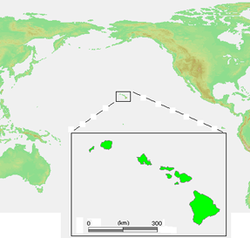 The Territory of Hawaii or Hawaii Territory<ref>{{#invoke:citation/CS1|citation |CitationClass=web }}</ref><ref>{{#invoke:citation/CS1|citation |CitationClass=web }}</ref><ref>http://www.census.gov/prod/cen2000/phc-3-13.pdf (U.S. Census Bureau, 2003, page III-1)</ref> was an organized incorporated territory of the United States that existed from July 7, 1898, until August 21, 1959, when its territory was admitted to the Union as the fiftieth U.S. state, the State of Hawaii. The Hawaii Admission Act explicitly specified that the State of Hawaii would not include Palmyra Island, the Midway Islands, Johnston Island, Sand Island (off-shore from Johnston Island), or Kingman Reef.<ref>{{#invoke:citation/CS1|citation |CitationClass=web }}</ref>

The U.S. Congress passed the Newlands Resolution which annexed the Republic of Hawaii to the United States. Hawaii's territorial history includes a period from 1941 to 1944—during World War II—when the islands were placed under martial law. Civilian government was dissolved and a military governor was appointed.