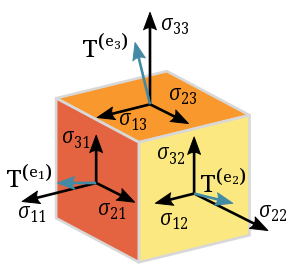 Tensors are geometric objects that describe linear relations between geometric vectors, scalars, and other tensors. Elementary examples of such relations include the dot product, the cross product, and linear maps. Euclidean vectors, often used in physics and engineering applications, and scalars themselves are also tensors.<ref>{{#invoke:citation/CS1|citation |CitationClass=web }}</ref> A more sophisticated example is the Cauchy stress tensor T, which takes a direction v as input and produces the stress T(v) on the surface normal to this vector for output, thus expressing a relationship between these two vectors, shown in the figure (right).

In terms of a coordinate basis or fixed frame of reference, a tensor can be represented as an organized multidimensional array of numerical values. The order (also degree) of a tensor is the dimensionality of the array needed to represent it, or equivalently, the number of indices needed to label a component of that array. For example, a linear map is represented by a matrix (a 2-dimensional array) in a basis, and therefore is a 2nd-order tensor. A vector is represented as a 1-dimensional array in a basis, and is a 1st-order tensor. Scalars are single numbers and are thus 0th-order tensors. Because they express a relationship between vectors, tensors themselves must be independent of a particular choice of coordinate system. The coordinate independence of a tensor then takes the form of a "covariant" transformation law that relates the array computed in one coordinate system to that computed in another one. The precise form of the transformation law determines the type (or valence) of the tensor. The tensor type is a pair of natural numbers (n, m), where n is the number of contravariant indices and m is the number of covariant indices. The total order of a tensor is the sum of these two numbers.

Tensors are important in physics because they provide a concise mathematical framework for formulating and solving physics problems in areas such as elasticity, fluid mechanics, and general relativity. Tensors were first conceived by Tullio Levi-Civita and Gregorio Ricci-Curbastro, who continued the earlier work of Bernhard Riemann and Elwin Bruno Christoffel and others, as part of the absolute differential calculus. The concept enabled an alternative formulation of the intrinsic differential geometry of a manifold in the form of the Riemann curvature tensor.<ref name="Kline">{{#invoke:citation/CS1|citation |CitationClass=book }}</ref>