Action in a triple threat tag team match for the WWE World Tag Team Championship. Shelton Benjamin (on the mat) from The World's Greatest Tag Team has been isolated in the corner of champions Cade and Murdoch, well away from partner Charlie Haas; either of these teams can tag in the third team, The Highlanders.

Tag team wrestling is a type of professional wrestling in which matches are contested between teams of multiple wrestlers. A tag team may be made up of wrestlers who normally wrestle in singles competition, but more commonly are made of established teams who wrestle regularly as a unit and have a team name and identity.

In most team matches, only one competitor per team is allowed in the ring at a time. This status as the active or legal wrestler may be transferred by physical contact, most commonly a palm-to-palm "tag" which resembles a high five.

The team-based match has been a mainstay of professional wrestling since the mid twentieth century, and most promotions have sanctioned a championship division for tag teams.

The term "tag team" has since become used in common parlance to describe two or more people who alternate or cooperate in participation in an activity, and "tag-teaming" to describe the act of alternating with an ally, e.g. a couple tag-teaming in an argument with another person. 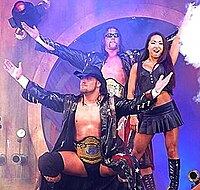