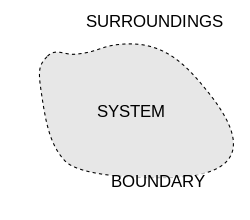 A schematic representation of a closed system and its boundary

A system is a set of interacting or interdependent component parts forming a complex/intricate whole.<ref>http://www.merriam-webster.com/dictionary/system</ref>

Every system is delineated by its spatial and temporal boundaries, surrounded and influenced by its environment, described by its structure and purpose and expressed in its functioning.