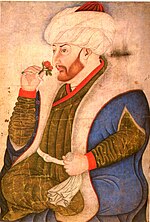 Sultan Mehmed II is considered one of the most famous Ottoman sultans.

Sultan ({{#invoke:IPAc-en|main}}; Arabic: سلطان‎{{#invoke:Category handler|main}} sulṭān, pronounced [sʊlˈtˤɑːn, solˈtˤɑːn]) is a noble title with several historical meanings. Originally, it was an Arabic abstract noun meaning "strength", "authority", "rulership", derived from the verbal noun سلطة{{#invoke:Category handler|main}} sulṭah, meaning "authority" or "power". Later, it came to be used as the title of certain rulers who claimed almost full sovereignty in practical terms (i.e., the lack of dependence on any higher ruler), albeit without claiming the overall caliphate, or to refer to a powerful governor of a province within the caliphate.

The dynasty and lands ruled by a sultan are referred to as a sultanate (سلطنة{{#invoke:Category handler|main}} salṭanah).

A feminine form of sultan, used by Westerners, is sultana or sultanah; however, this styling misconstrues the roles of wives of sultans. In a similar usage, the wife of a German field marshal might be styled Frau Feldmarschall (in French, similar constructions of the type madame la maréchale are quite common). The rare female leaders in Muslim history are correctly known as "sultanas". However, in the Sultanate of Sulu, the wife of the sultan is styled as the "panguian".

Among those modern hereditary rulers who wish to emphasize their secular authority under the rule of law, the term is gradually being replaced by king (i.e. malik in Arabic) and Datu in Maranao.