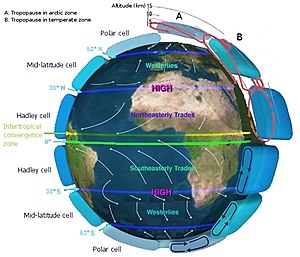 Heating of the earth near the equator leads to large amounts of upward motion and convection along the monsoon trough or Intertropical convergence zone. The upper-level divergence over the near-equatorial trough leads to air rising and moving away from the equator aloft. As the air moves towards the Mid-Latitudes, it cools and sinks, which leads to subsidence near the 30th parallel of both hemispheres. This circulation is known as the Hadley cell and leads to the formation of the subtropical ridge.<ref>Dr. Owen E. Thompson (1996). Hadley Circulation Cell. Channel Video Productions. Retrieved on 2007-02-11.</ref> Many of the world's deserts are caused by these climatological high-pressure areas,<ref>ThinkQuest team 26634 (1999). The Formation of Deserts. Oracle ThinkQuest Education Foundation. Retrieved on 2009-02-16.</ref> located within the subtropics. This regime is known as an arid subtropical climate, which is generally located in areas adjacent to powerful cold ocean currents. Examples of this climate, the coastal areas of southern Africa (Namibia, South Africa), south of the Canary Islands and the coasts of Peru and Chile.<ref name="britannica.com">http://www.britannica.com/EBchecked/topic/606540/tropical-and-subtropical-desert-climate</ref>

A savanna is a grassland biome located in semi-arid to semi-humid climate regions of subtropical and tropical latitudes, with rainfall between {{safesubst:#invoke:convert|convert}} and {{safesubst:#invoke:convert|convert}} a year. They are widespread on Africa, and are also found in India, and Australia.<ref name="SAVWOOD">{{#invoke:citation/CS1|citation |CitationClass=web }}</ref> The savannah climate regime in the subtropics, Florida and East Texas have a rainy season.<ref>Randy Lascody (2008). The Florida Rain Machine. National Weather Service. Retrieved on 2009-02-06.</ref><ref>{{#invoke:Citation/CS1|citation |CitationClass=journal }}</ref> Monsoon regions with a wet season include western Mexico.<ref>Remote Sensing for Migratory Creatures (2002). Phenology and Creature Migration: Dry season and wet season in West Mexico. Arizona Remote Sensing Center. Retrieved on 2009-02-06.</ref> the Desert Southwest of the United States,<ref name="JHorel">J. Horel (2006). Normal Monthly Precipitation, Inches. University of Utah. Retrieved on 2008-03-19.</ref> Within the Mediterranean climate regime, the west coast of the United States and the Mediterranean coastline of Italy, Greece,<ref>Greek Embassy London (2008). Welcome to Greece. Government of Greece. Retrieved on 2009-02-06.</ref> and Turkey experience a wet season in the winter months.<ref>D. Bozkurt, O.L. Sen and M. Karaca (2008). Wet season evaluation of RegCM3 performance for Eastern Mediterranean. EGU General Assembly. Retrieved on 2009-02-06.</ref> Similarly, the wet season in the Negev desert of Israel extends from October through May.<ref>{{#invoke:Citation/CS1|citation |CitationClass=journal }}</ref> At the boundary between the Mediterranean and monsoon climates lies the Sonoran desert, which receives the two rainy seasons associated with each climate regime.<ref>Michael J. Plagens (2009). What and Where is the Sonoran Desert? Arizonensis. Retrieved on 2009-02-07.</ref>