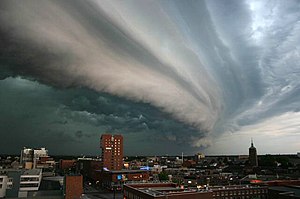 A shelf cloud associated with a heavy or severe thunderstorm over Enschede, Netherlands.

A storm is any disturbed state of an environment or astronomical body's atmosphere especially affecting its surface, and strongly implying severe weather. It may be marked by significant disruptions to normal conditions such as strong wind, hail, thunder and lightning (a thunderstorm), heavy precipitation (snowstorm, rainstorm), heavy freezing rain (ice storm), strong winds (tropical cyclone, windstorm), or wind transporting some substance through the atmosphere as in a dust storm, blizzard, sandstorm, etc.

Storms generally lead to negative impacts on lives and property such as storm surge, heavy rain or snow (causing flooding or road impassibility), lightning, wildfires, and vertical wind shear; however, systems with significant rainfall can alleviate drought in places they move through. Heavy snowfall can allow special recreational activities to take place which would not be possible otherwise, such as skiing and snowmobiling.