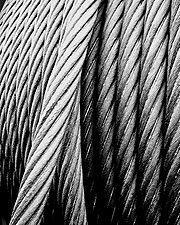 The steel cable of a colliery winding tower

Steels are alloys of iron and other elements, primarily carbon, widely used in construction and other applications because of their high tensile strengths and low costs. Carbon, other elements, and inclusions within iron act as hardening agents that prevent the movement of dislocations that otherwise occur in the crystal lattices of iron atoms.

The carbon in typical steel alloys may contribute up to 2.1% of its weight. Varying the amount of alloying elements, their formation in the steel either as solute elements, or as precipitated phases, retards the movement of those dislocations that make iron comparatively ductile and weak, and thus controls qualities such as the hardness, ductility, and tensile strength of the resulting steel. Steel's strength compared to pure iron is only possible at the expense of ductility, of which iron has an excess.

Although steel had been produced in bloomery furnaces for thousands of years, steel's use expanded extensively after more efficient production methods were devised in the 17th century for blister steel and then crucible steel. With the invention of the Bessemer process in the mid-19th century, a new era of mass-produced steel began. This was followed by Siemens-Martin process and then Gilchrist-Thomas process that refined the quality of steel. With their introductions, mild steel replaced wrought iron.

Further refinements in the process, such as basic oxygen steelmaking (BOS), largely replaced earlier methods by further lowering the cost of production and increasing the quality of the metal. Today, steel is one of the most common materials in the world, with more than 1.3 billion tons produced annually. It is a major component in buildings, infrastructure, tools, ships, automobiles, machines, appliances, and weapons. Modern steel is generally identified by various grades defined by assorted standards organizations.