Shaking hands after the match is considered a symbol of good sportsmanship. 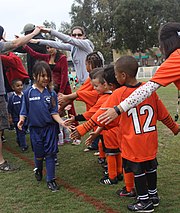 'Sportsmanship' is an aspiration or ethos that a sport or activity will be enjoyed for its own sake, with proper consideration for fairness, ethics, respect, and a sense of fellowship with one's competitors. A sore loser refers to one who does not take defeat well, whereas a good sport means being a "good winner" as well as being a "good loser".<ref>See, e.g., Joel Fish and Susan Magee, 101 Ways to Be a Terrific Sports Parent, p. 168. Fireside, 2003.</ref><ref>David Lacey, "It takes a bad loser to become a good winner." The Guardian, November 10, 2007.</ref>

Sportsmanship can be conceptualized as an enduring and relatively stable characteristic or disposition such that individuals differ in the way they are generally expected to behave in sport situations. In general, sportsmanship refers to virtues such as fairness, self-control, courage, and persistence,<ref name="Shields & Bredemeier, 1995">Shields & Bredemeier, 1995.</ref> and has been associated with interpersonal concepts of treating others and being treated fairly, maintaining self-control if dealing with others, and respect for both authority and opponents. Sportsmanship is also looked at as being the way one reacts to a sport/game/player.

The four elements of sportsmanship are often shown being good form, the will to win,willing to lose equity and fairness. All four elements are critical and a balance must be found amongst all four for true sportsmanship to be illustrated.(6) These elements may also cause conflict, as a person may desire to win more than play in equity and fairness and thus resulting in a clash within the aspects of sportsmanship. This will cause problems as the person believes they are being a good sportsman, but they are defeating the purpose of this idea as they are ignoring two key components of being sportsman like. When athletes become too self-centred, the idea of sportsmanship unfortunately is dismissed. (9)

Today's sporting culture, in particular the base of elite sport, places great importance on the idea of competition and winning and thus sportsmanship takes a back seat as a result. (10) In most, if not all sports, athletes at the elite level make the standards on sportsmanship and no matter if they like it or not, they are seen as leaders and role models in society. (11)

Since every sport is rule driven, the most common offence of bad sportsmanship is the act of cheating or breaking the rules to gain an unfair advantage(Feezell, 1996)[7] . A competitor who exhibits poor sportsmanship after losing a game or contest is often called a "sore loser" (those who show poor sportsmanship after winning are typically called "bad champs"). Sore loser behaviour includes blaming others for the loss, not accepting responsibility for personal actions that contributed to the defeat, reacting to the loss in an immature or improper fashion, making excuses for the defeat, and citing unfavourable conditions or other petty issues as reasons for the defeat.<ref>"MJD", If he's going to lose, Bill Belichick would rather be elsewhere. Yahoo Sports, February 3, 2008.</ref><ref>E-releases, Sueper Winners and Losers ("The Patriots’ coach was eviscerated by sports pundits for leaving the field before the game was actually finished").</ref> A bad winner acts in a shallow fashion after his or her victory, such as by gloating about his or her win, rubbing the win in the face(s) of the opponent(s), and lowering the opponent(s)'s self-esteem by constantly reminding the opponent(s) of "poor" performance in comparison (even if the opponent(s) competed well). Not showing respect to the other team is considered to being a bad sportsman and could lead to demoralising affects as Leslie Howe describes if a pitcher in baseball decides to pitch not to his maximum ability suggest that the batter is not at an adequate level and could lead to the batter to have low self-confidence or worth (Howe 2004, 221) [8]

There are six different categories relating to sportsmanship, the elements of sports: the elements of sportsmanship, clarifications, conflicts, balance and irreducibility (Abad, 2010). All six of these characterize a person with good sportsmanship. Even though there are some affinity between some of the categories, they are distinct elements. (Abad, 2010)<ref>{{#invoke:Citation/CS1|citation |CitationClass=journal }}</ref> 'In essence, play has for its directed and immediate end joy, pleasure, and delights and which is dominated by a spirit of moderation and generosity. Athletics, on the other hand, is essentially a competitive activity, which has for its end victory in the contest and which is characterized of dedication, sacrifice and intensity.' (Feelezz, 1896, pp. 3) Hence, the virtues of a player are radically different from the virtues of an athlete. (Feelezz, 1896, pp. 3). When talking about misunderstanding sportsmanship, Rudd and Stoll (2013) provide an example from 1995, a U.S. high school athletic league banned the post-game handshake that was a part of sports such as football and basketball. The handshaking was banned because of fights that were ensuing after the handshake.(pp. 41) Most players are influenced by the leaders around them such as coaches and older players, if there are coaches and administrators who don't understand sportsmanship, then what about the players? (Rudd & stoll, 2013, pp. 41)