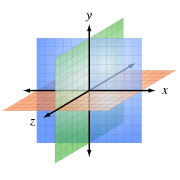 Space is the boundless three-dimensional extent in which objects and events have relative position and direction.<ref>{{#invoke:citation/CS1|citation |CitationClass=web }}</ref> Physical space is often conceived in three linear dimensions, although modern physicists usually consider it, with time, to be part of a boundless four-dimensional continuum known as spacetime. The concept of space is considered to be of fundamental importance to an understanding of the physical universe. However, disagreement continues between philosophers over whether it is itself an entity, a relationship between entities, or part of a conceptual framework.

Debates concerning the nature, essence and the mode of existence of space date back to antiquity; namely, to treatises like the Timaeus of Plato, or Socrates in his reflections on what the Greeks called khôra (i.e. "space"), or in the Physics of Aristotle (Book IV, Delta) in the definition of topos (i.e. place), or in the later "geometrical conception of place" as "space qua extension" in the Discourse on Place (Qawl fi al-Makan) of the 11th-century Arab polymath Alhazen.<ref>Refer to Plato's Timaeus in the Loeb Classical Library, Harvard University, and to his reflections on khora. See also Aristotle's Physics, Book IV, Chapter 5, on the definition of topos. Concerning Ibn al-Haytham's 11th century conception of "geometrical place" as "spatial extension", which is akin to Descartes' and Leibniz's 17th century notions of extensio and analysis situs, and his own mathematical refutation of Aristotle's definition of topos in natural philosophy, refer to: Nader El-Bizri, "In Defence of the Sovereignty of Philosophy: al-Baghdadi's Critique of Ibn al-Haytham's Geometrisation of Place", Arabic Sciences and Philosophy: A Historical Journal (Cambridge University Press), Vol. 17 (2007), pp. 57-80.</ref> Many of these classical philosophical questions were discussed in the Renaissance and then reformulated in the 17th century, particularly during the early development of classical mechanics. In Isaac Newton's view, space was absolute—in the sense that it existed permanently and independently of whether there was any matter in the space.<ref>French and Ebison, Classical Mechanics, p. 1</ref> Other natural philosophers, notably Gottfried Leibniz, thought instead that space was in fact a collection of relations between objects, given by their distance and direction from one another. In the 18th century, the philosopher and theologian George Berkeley attempted to refute the "visibility of spatial depth" in his Essay Towards a New Theory of Vision. Later, the metaphysician Immanuel Kant said that neither space nor time can be empirically perceived—they are elements of a systematic framework that humans use to structure all experiences. Kant referred to "space" in his Critique of Pure Reason as being a subjective "pure a priori form of intuition", hence it is an unavoidable contribution of our human faculties.

In the 19th and 20th centuries mathematicians began to examine geometries that are not Euclidean, in which space can be said to be curved, rather than flat. According to Albert Einstein's theory of general relativity, space around gravitational fields deviates from Euclidean space.<ref>Carnap, R. An introduction to the Philosophy of Science</ref> Experimental tests of general relativity have confirmed that non-Euclidean geometries provide a better model for the shape of space.