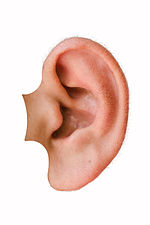 A distinct use of the term sound from its use in physics is that in physiology and psychology, where the term refers to the subject of perception by the brain. The field of psychoacoustics is dedicated to such studies.

The physical reception of sound in any hearing organism is limited to a range of frequencies. Humans normally hear sound frequencies between approximately 20 Hz and 20,000 Hz (20 kHz),Unknown extension tag "ref":382 The upper limit decreases with age.<ref name="Olson1967">{{#invoke:citation/CS1|citation |CitationClass=book }}</ref>:249

Other species have a different range of hearing. For example, dogs can perceive vibrations higher than 20 kHz, but are deaf below 40 Hz. As a signal perceived by one of the major senses, sound is used by many species for detecting danger, navigation, predation, and communication. Earth's atmosphere, water, and virtually any physical phenomenon, such as fire, rain, wind, surf, or earthquake, produces (and is characterized by) its unique sounds. Many species, such as frogs, birds, marine and terrestrial mammals, have also developed special organs to produce sound. In some species, these produce song and speech. Furthermore, humans have developed culture and technology (such as music, telephone and radio) that allows them to generate, record, transmit, and broadcast sound.

Sometimes sound refers to only those vibrations with frequencies that are within the hearing range for humans<ref>{{#invoke:Citation/CS1|citation |CitationClass=journal }}</ref> or for a particular animal.

Noise is a term often used to refer to an unwanted sound. In science and engineering, noise is an undesirable component that obscures a wanted signal.