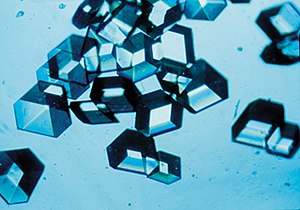 Solid is one of the four fundamental states of matter (the others being liquid, gas, and plasma). It is characterized by structural rigidity and resistance to changes of shape or volume. Unlike a liquid, a solid object does not flow to take on the shape of its container, nor does it expand to fill the entire volume available to it like a gas does. The atoms in a solid are tightly bound to each other, either in a regular geometric lattice (crystalline solids, which include metals and ordinary ice) or irregularly (an amorphous solid such as common window glass).

The branch of physics that deals with solids is called solid-state physics, and is the main branch of condensed matter physics (which also includes liquids). Materials science is primarily concerned with the physical and chemical properties of solids. Solid-state chemistry is especially concerned with the synthesis of novel materials, as well as the science of identification and chemical composition.