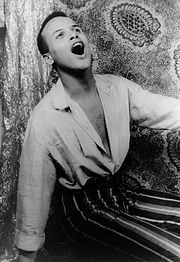 Singing is the act of producing musical sounds with the voice, and augments regular speech by the use of both tonality and rhythm. One who sings is called a singer or vocalist. Singers perform music (arias, recitatives, songs, etc.) that can be sung either with or without accompaniment by musical instruments. Singing is often done in a group of other musicians, such as in a choir of singers with different voice ranges, or in an ensemble with instrumentalists, such as a rock group or baroque ensemble or as a soloist.

In many respects human song is a form of sustained speech. Singing can be formal or informal, arranged or improvised. It may be done for religious devotion, pleasure, comfort, ritual, education, or profit. Excellence in singing may require time, dedication, instruction, and regular practice. If practice is done on a regular basis then the sounds are said to be more clear and strong.<ref name="Musicguides"> {{#invoke:citation/CS1|citation |CitationClass=book }}</ref> Professional singers usually build their careers around one specific musical genre, such as classical or rock. They typically take voice training provided by voice teachers or vocal coaches throughout their careers.