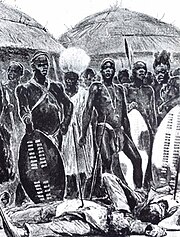 Zulu warriors with shields, a detail from an 1847 drawing

Wall painting depicting a Mycenaean Greek "figure eight" shield with a suspension strap at the middle, 15th century BC, National Archaeological Museum, Athens -The faces of figure eight shields were quite convex. The cited "strap" may be the ridge on the front (so denoted by the visible pattern of the ox hide) of the shield.

A shield is a type of personal armor, meant to intercept attacks, either by stopping projectiles such as arrows or redirecting a hit from a sword, mace, battle axe or similar weapon to the side of the shield-bearer.

Shields vary greatly in size, ranging from large panels that protect the user's entire body to small models (such as the buckler) that were intended for hand-to-hand-combat use. Shields also vary a great deal in thickness; whereas some shields were made of relatively deep, absorbent, wooden planking to protect soldiers from the impact of spears and crossbow bolts, others were thinner and lighter and designed mainly for deflecting blade strikes.

In prehistory and during the era of the earliest civilizations, shields were made of wood, animal hide, woven reeds or wicker. In classical antiquity, the Migration Period and the Middle Ages, they were normally constructed of poplar, lime or another split-resistant timber, covered in some instances with a material such as leather or rawhide and often reinforced with a metal boss, rim or banding. They were carried by foot soldiers, knights and cavalry.

Depending on time and place, shields could be round, oval, square, rectangular, triangular, bilobal or scalloped. Sometimes they took on the form of kites or flatirons, or had rounded tops on a rectangular base with perhaps an eyehole. The shield was held by a central grip or by straps which went over or around the user's arm.

Often shields were decorated with a painted pattern or an animal representation and these designs developed into systematized heraldic devices during the High Middle Ages for purposes of battlefield identification. Even after the introduction of gunpowder and firearms to the battlefield, shields continued to be used by certain groups. In the 18th century, for example, Scottish Highland fighters liked to wield small shields (known as a targe), and as late as the 19th century, some non-industrialized peoples (such as Zulu warriors) employed them when waging war.

In the 20th and 21st century, shields have been used by military and police units that specialize in anti-terrorist actions, hostage rescue, riot control and siege-breaking. The modern term usually refers to a device that is held in the hand or attached to the arm, as opposed to an armored suit or a bullet-proof vest. Shields are also sometimes mounted on vehicle-mounted weapons to protect the operator.