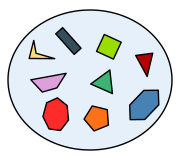 A set of polygons in a Venn diagram

In mathematics, a set is a collection of distinct objects, considered as an object in its own right. For example, the numbers 2, 4, and 6 are distinct objects when considered separately, but when they are considered collectively they form a single set of size three, written {2,4,6}. Sets are one of the most fundamental concepts in mathematics. Developed at the end of the 19th century, set theory is now a ubiquitous part of mathematics, and can be used as a foundation from which nearly all of mathematics can be derived. In mathematics education, elementary topics such as Venn diagrams are taught at a young age, while more advanced concepts are taught as part of a university degree. The German word Menge, rendered as "set" in English, was coined by Bernard Bolzano in his work The Paradoxes of the Infinite.