In mathematics, a sequence is an ordered collection of objects in which repetitions are allowed. Like a set, it contains members (also called elements, or terms). The number of elements (possibly infinite) is called the length of the sequence. Unlike a set, order matters, and exactly the same elements can appear multiple times at different positions in the sequence. Formally, a sequence can be defined as a function whose domain is a countable totally ordered set, such as the natural numbers.

For example, (M, A, R, Y) is a sequence of letters with the letter 'M' first and 'Y' last. This sequence differs from (A, R, M, Y). Also, the sequence (1, 1, 2, 3, 5, 8), which contains the number 1 at two different positions, is a valid sequence. Sequences can be finite, as in these examples, or infinite, such as the sequence of all even positive integers (2, 4, 6,...). In computing and computer science, finite sequences are sometimes called strings, words or lists, the different names commonly corresponding to different ways to represent them into computer memory; infinite sequences are also called streams. The empty sequence ( ) is included in most notions of sequence, but may be excluded depending on the context. 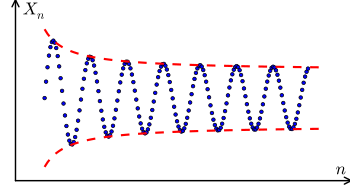 An infinite sequence of real numbers (in blue). This sequence is neither increasing, nor decreasing, nor convergent, nor Cauchy. It is, however, bounded.