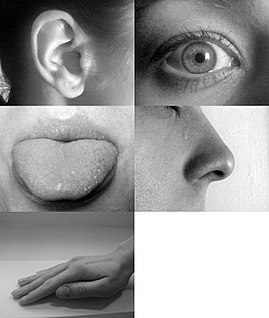 An allegory of five senses. Still Life by Pieter Claesz, 1623. The painting illustrates the senses through musical instruments, a compass, a book, food and drink, a mirror, incense and an open perfume bottle. The tortoise may be an illustration of touch or an allusion to the opposite,(the tortoise isolating in its shell)

A sense is a physiological capacity of organisms that provides data for perception. The senses and their operation, classification, and theory are overlapping topics studied by a variety of fields, most notably neuroscience, cognitive psychology (or cognitive science), and philosophy of perception. The nervous system has a specific sensory system or organ, dedicated to each sense.

Humans have a multitude of senses. Sight (ophthalmoception), hearing (audioception), taste (gustaoception), smell (olfacoception or olfacception), and touch (tactioception) are the five traditionally recognized senses. The ability to detect other stimuli beyond those governed by these most broadly recognized senses also exists, and these sensory modalities include temperature (thermoception), kinesthetic sense (proprioception), pain (nociception), balance (equilibrioception), vibration (mechanoreception), and various internal stimuli (e.g. the different chemoreceptors for detecting salt and carbon dioxide concentrations in the blood). However, what constitutes a sense is a matter of some debate, leading to difficulties in defining what exactly a distinct sense is, and where the borders between responses to related stimuli lay.

Other animals also have receptors to sense the world around them, with degrees of capability varying greatly between species. Humans have a comparatively weak sense of smell relative to many other mammals while some animals may lack one or more of the traditional five senses. Some animals may also intake and interpret sensory stimuli in very different ways. Some species of animals are able to sense the world in a way that humans cannot, with some species able to sense electrical and magnetic fields, and detect water pressure and currents.