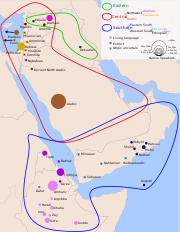 In studies of linguistics and ethnology, the term Semitic (from the biblical "Shem", Hebrew: שם‎{{#invoke:Category handler|main}}) was first used to refer to a family of languages native to West Asia (the Middle East). The languages evolved and spread to Asia Minor, North Africa, the Horn of Africa and Malta, and are now referred to cumulatively as the Semitic languages. The languages include the ancient and modern forms of Ahlamu; Akkadian (including Assyrian and Babylonian dialects); Amharic; Amalekite; Ammonite; Amorite; Arabic; Aramaic/Syriac; the Canaanite languages (Phoenician, Punic or Carthaginian and Hebrew); Assyrian; Chaldean; Eblaite; Edomite; Ge'ez; Old South Arabian; Modern South Arabian languages; Maltese; Mandaic; Moabite; Proto-Sinaitic; Sutean; Syriac; Tigre and Tigrinya; and Ugaritic, among others.

As language studies are interwoven with cultural studies, the term also came to describe the extended cultures and ethnicities, as well as the history of these varied peoples as associated by close geographic and linguistic distribution.<ref>"Semite". Merriam-Webster's Collegiate® Dictionary, Eleventh Edition.</ref> Today, the word "Semite" may be used to refer to any member of any of a number of peoples of ancient Middle East including the Akkadians, Assyrians, Arameans, Phoenicians, Hebrews (Jews), Arabs, and their descendants.<ref name=britannica>{{#invoke:citation/CS1|citation |CitationClass=web }}</ref>