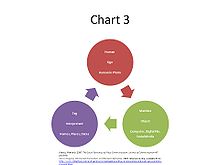 {{#invoke:Sidebar|sidebar}} Semiotics (also called semiotic studies; not to be confused with the Saussurean tradition called semiology which is a part of semiotics) is the study of meaning-making, the study of sign processes and meaningful communication.<ref>"The science of communication studied through the interpretation of signs and symbols as they operate in various fields, esp. language", Oxford English Dictionary (2003)</ref> This includes the study of signs and sign processes (semiosis), indication, designation, likeness, analogy, metaphor, symbolism, signification, and communication. Semiotics is closely related to the field of linguistics, which, for its part, studies the structure and meaning of language more specifically. The semiotic tradition explores the study of signs and symbols as a significant part of communications. As different from linguistics, however, semiotics also studies non-linguistic sign systems. Semiotics is often divided into three branches:

Semiotics is frequently seen as having important anthropological dimensions; for example, Umberto Eco proposes that every cultural phenomenon may be studied as communication.<ref name=caesar>{{#invoke:citation/CS1|citation |CitationClass=book }}</ref> Some semioticians focus on the logical dimensions of the science, however. They examine areas belonging also to the life sciences—such as how organisms make predictions about, and adapt to, their semiotic niche in the world (see semiosis). In general, semiotic theories take signs or sign systems as their object of study: the communication of information in living organisms is covered in biosemiotics (including zoosemiotics).

Syntactics is the branch of semiotics that deals with the formal properties of signs and symbols.<ref>The American Heritage Dictionary of the English Language: Syntactics</ref> More precisely, syntactics deals with the "rules that govern how words are combined to form phrases and sentences".<ref>Wiktionary.org</ref>

Charles Morris adds that semantics deals with the relation of signs to their designata and the objects that they may or do denote; and, pragmatics deals with the biotic aspects of semiosis, that is, with all the psychological, biological, and sociological phenomena that occur in the functioning of signs.