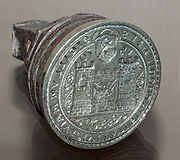 A seal is a device for making an impression in wax, clay, paper, or some other medium, including an embossment on paper, and is also the impression thus made. The original purpose was to authenticate a document, a wrapper for one such as a modern envelope, or the cover of a container or package holding valuables or other objects.

The seal-making device is also referred to as the seal matrix or die; the imprint it creates as the seal impression (or, more rarely, the sealing).<ref>New 2010, p. 7.</ref> If the impression is made purely as a relief resulting from the greater pressure on the paper where the high parts of the matrix touch, the seal is known as a dry seal; in other cases ink or another liquid or liquefied medium is used, in another color than the paper.

In most traditional forms of dry seal the design on the seal matrix is in intaglio (cut below the flat surface) and therefore the design on the impressions made is in relief (raised above the surface). The design on the impression will reverse (be a mirror-image of) that of the matrix, which is especially important when script is included in the design, as it very often is. This will not be the case if paper is embossed from behind, where the matrix and impression read the same way, and both matrix and impression are in relief. However engraved gems were often carved in relief, called cameo in this context, giving a "counter-relief" or intaglio impression when used as seals. The process is essentially that of a mould.

Most seals have always given a single impression on an essentially flat surface, but in medieval Europe two-sided seals with two matrices were often used by institutions or rulers (such as towns, bishops and kings) to make two-sided or fully three-dimensional impressions in wax, with a "tag", a piece of ribbon or strip of parchment, running through them. These "pendent" seal impressions dangled below the documents they authenticated, to which the attachment tag was sewn or otherwise attached (single-sided seals were treated in the same way).

In the United States, the word "seal" is sometimes assigned to a facsimile of the seal design (in monochrome or color), which may be used in a variety of contexts including architectural settings, on flags, or on official letterheads. Thus, for example, the Great Seal of the United States, among other uses, appears on the reverse of the one-dollar bill; and several of the seals of the U.S. states appear on their respective state flags. In Europe, although coats of arms and heraldic badges may well feature in such contexts as well as on seals, the seal design in its entirety rarely appears as an emblem.

The study of seals is known as sigillography or sphragistics.