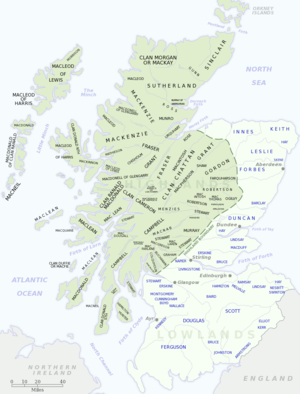 A Scottish clan (from Gaelic clann{{#invoke:Category handler|main}}, "children") is a kinship group among the Scottish people. Clans give a sense of shared identity and descent to members, and in modern times have an official structure recognised by the Court of the Lord Lyon, which regulates Scottish heraldry and coats of arms. Most clans have their own tartan patterns, usually dating from the 19th century, which members may incorporate into kilts or other clothing.

The modern image of clans, each with their own tartan and specific land, was promulgated by the Scottish author Sir Walter Scott after influence by others. Historically, tartan designs were associated with Lowland and Highland districts whose weavers tended to produce cloth patterns favoured in those districts. By process of social evolution, it followed that the clans/families prominent in a particular district would wear the tartan of that district, and it was but a short step for that community to become identified by it.

Many clans have their own clan chief; those that do not are known as armigerous clans. Clans generally identify with geographical areas originally controlled by their founders, sometimes with an ancestral castle and clan gatherings, which form a regular part of the social scene. The most notable gathering of recent times was "The Gathering 2009", which included a "clan convention" in the Scottish parliament.<ref name="Scotsman1">{{#invoke:citation/CS1|citation |CitationClass=news }}</ref>

It is a common misconception that every person who bears a clan's name is a lineal descendant of the chiefs.<ref name="CLANSSCOTLANDSPEOPLE"/> Many clansmen although not related to the chief took the chief's surname as their own to either show solidarity, or to obtain basic protection or for much needed sustenance.<ref name="CLANSSCOTLANDSPEOPLE">{{#invoke:citation/CS1|citation |CitationClass=web }}</ref> Most of the followers of the clan were tenants, who supplied labour to the clan leaders.<ref name=Roberts2000p13>J. L. Roberts, Clan, King, and Covenant: History of the Highland Clans from the Civil War to the Glencoe Massacre (Edinburgh: Edinburgh University Press, 2000), ISBN 0-7486-1393-5, p. 13.</ref> Contrary to popular belief, the ordinary clansmen rarely had any blood tie of kinship with the clan chiefs, but they took the chief's surname as their own when surnames came into common use in the sixteenth and seventeenth centuries.<ref name=Roberts2000p13/> Thus by the eighteenth century the myth had arisen that the whole clan was descended from one ancestor, with the Scottish Gaelic of "clan" meaning "children" or "offspring".<ref name=Roberts2000p13/>