The Funeral of Shelley by Louis Edouard Fournier (1889); the group members, from left to right, are Trelawny, Hunt and Byron 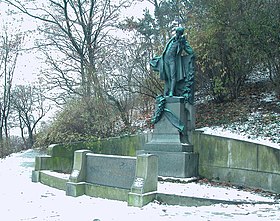 In the Western cultural context, romanticism substantially contributed to the idea of what a real poet should look like. An idealized statue of a Czech poet Karel Hynek Mácha (in Petřín Park, Prague) represents him as a slim, tender and perhaps unhealthy boy. However, anthropological examination proved that he was a man of a strong, robust and muscular bodily constitution.

Romantic poetry is the poetry of Romanticism, a philosophical, literary, artistic and cultural era<ref>Romanticism. Academic.brooklyn.cuny.edu. Retrieved on 2012-05-17.</ref> which reacted against the prevailing Enlightenment ideals of the day in favor more natural, emotional, and personal artistic themes.<ref>Introduction to Romanticism. Uh.edu. Retrieved on 2012-05-17.</ref><ref>Romanticism : Introduction – Britannica Online Encyclopedia. Britannica.com. Retrieved on 2012-05-17.</ref> Inevitably, the characterization of a broad range of contemporaneous poets and poetry under the single unifying name can be viewed more as an exercise in historical compartmentalization than an attempt to capture the essence of the actual movement.{{ safesubst:#invoke:Unsubst||date=__DATE__ |$B= {{#invoke:Category handler|main}}{{#invoke:Category handler|main}}[citation needed] }}

Poets such as William Wordsworth were actively engaged in trying to create a new kind of poetry that emphasized intuition over reason and the pastoral over the urban, often eschewing consciously poetic language in an effort to use more colloquial language. Wordsworth himself in the Preface to his and Coleridge's Lyrical Ballads defined good poetry as “the spontaneous overflow of powerful feelings,” though in the same sentence he goes on to clarify this statement by asserting that nonetheless any poem of value must still be composed by a man “possessed of more than usual organic sensibility [who has] also thought long and deeply;” he also emphasizes the importance of the use of meter in poetry (which he views as one of the key features that differentiates poetry from prose).<ref>Wordsworth, William. The Poetical Works of Wordsworth. Oxford University Press. London, 1960.</ref> Although many people stress the notion of spontaneity in Romantic poetry, the movement was still greatly concerned with the pain of composition, of translating these emotive responses into poetic form. Indeed, Samuel Taylor Coleridge, another prominent Romantic poet and critic in his On Poesy or Art sees art as “the mediatress between, and reconciler of nature and man”.<ref>Coleridge, Samuel Taylor. On Poesy or Art. Harvard Classics, 1914.</ref> Such an attitude reflects what might be called the dominant theme of Romantic poetry: the filtering of natural emotion through the human mind in order to create art, coupled with an awareness of the duality created by such a process.

For some critics, the term Romantic establishes an artificial context for disparate works and so removes a work from its real historical context, at the expense of equally valid terms (particularly those related to politics).<ref>Hume</ref>{{ safesubst:#invoke:Unsubst||$N=Verify source |date=__DATE__ |$B= {{#invoke:Category handler|main}}[verification needed] }}

The six most well-known English authors are, in order of birth and with an example of their work:

Although chronologically earliest among these writers, William Blake was a relatively late addition to the list; prior to the 1970s, romanticism was known for its "Big Five."<ref>Wu, Duncan and David Miall (1994). Romanticism: An Anthology. London: Basil Blackwell, xxxvi.</ref>