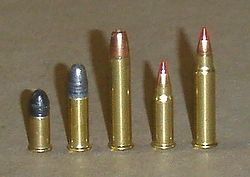 Comparison of centerfire and rimfire ignition

Rimfire is a term used to describe a method of ignition for metallic firearm cartridges as well as the cartridges themselves. It is called rimfire because the firing pin of a gun strikes and crushes the base's rim to ignite the primer. This is in contrast to the more common centerfire method, where the firing pin strikes the primer cap at the center of the base of the cartridge.

The rim of the rimfire cartridge is essentially an extended and widened percussion cap which contains the priming compound, while the cartridge case itself contains the propellant powder and the projectile (bullet).

Once the rim of the cartridge has been struck and the bullet discharged, the cartridge cannot be reloaded, because the head has been deformed by the firing pin impact.

While many other different cartridge priming methods have been tried since the 19th century, only rimfire technology and centerfire technology survive today in significant use.