{{#invoke:Hatnote|hatnote}} {{#invoke:redirect hatnote|redirect}} In physics, resonance is a phenomenon that occurs when a vibrating system or external force drives another system to oscillate with greater amplitude at a specific preferential frequency. 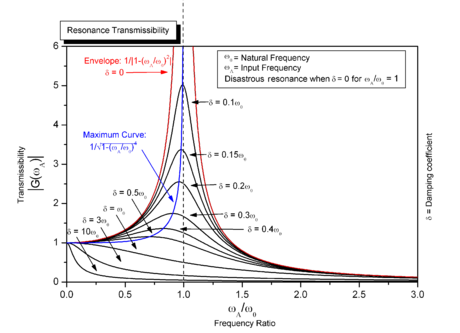 Resonance occurs when a system is able to store and easily transfer energy between two or more different storage modes (such as kinetic energy and potential energy in the case of a pendulum). However, there are some losses from cycle to cycle, called damping. When damping is small, the resonant frequency is approximately equal to the natural frequency of the system, which is a frequency of unforced vibrations. Some systems have multiple, distinct, resonant frequencies.

The term Resonance (from Latin resonantia, 'echo', from resonare, 'resound') originates from the field of acoustics, particularly observed in musical instruments, e.g., when strings started to vibrate and to produce sound without direct excitation by the player.