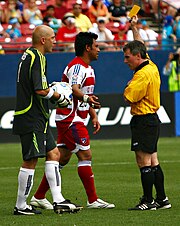 A referee (right) issues a yellow card to a player during a game of association football.

A referee is the person of authority in a variety of sports who is responsible for presiding over the game from a neutral point of view and making on-the-fly decisions that enforce the rules of the sport, including sportsmanship decisions such as ejection. The official tasked with this job may be known, in addition to referee, by a variety of other titles as well (often depending on the sport), including umpire, judge, arbiter, arbitrator, linesman, commissaire, timekeeper, touch judge or Technical Official (by the International Olympic Committee).