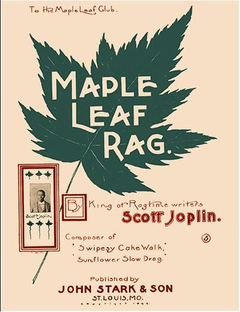 Second edition cover of Maple Leaf Rag, one of the most famous rags

Ragtime fell out of favor as jazz claimed the public's imagination after 1917, but there have been numerous revivals since the music has been re-discovered. First in the early 1940s, many jazz bands began to include ragtime in their repertoire and put out ragtime recordings on 78 rpm records. A more significant revival occurred in the 1950s as a wider variety of ragtime styles of the past were made available on records, and new rags were composed, published, and recorded. In 1971 Joshua Rifkin brought out a compilation of Joplin's work which was nominated for a Grammy Award.<ref name="Past Winner Database">Past Winner Database, "1971 14th Grammy Awards." Accessed Feb. 19, 2007.</ref> In 1973 The New England Ragtime Ensemble (then a student group called The New England Conservatory Ragtime Ensemble) recorded The Red Back Book, a compilation of some of Joplin's rags in period orchestrations edited by conservatory president Gunther Schuller. This also won a Grammy for Best Chamber Music Performance of the year and was named Billboard's Top Classical Album of 1974. Subsequently, the motion picture The Sting (1973) brought ragtime to a wide audience with its soundtrack of Joplin tunes. The film's rendering of "The Entertainer", adapted and orchestrated by Marvin Hamlisch, was a Top 5 hit in 1974.