Radar astronomy is a technique of observing nearby astronomical objects by reflecting microwaves off target objects and analyzing the reflections. This research has been conducted for six decades. Radar astronomy differs from radio astronomy in that the latter is a passive observation and the former an active one. Radar systems have been used for a wide range of solar system studies. The radar transmission may either be pulsed or continuous.

The strength of the radar return signal is proportional to the inverse fourth-power of the distance. Upgraded facilities, increased transceiver power, and improved apparatus have increased observational opportunities.

Radar techniques provide information unavailable by other means, such as testing general relativity by observing Mercury<ref></ref> and providing a refined value for the astronomical unit.<ref name="SP4218"/> Radar images provide information about the shapes and surface properties of solid bodies, which cannot be obtained by other ground-based techniques. 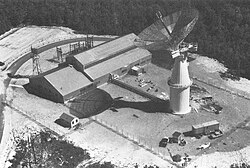 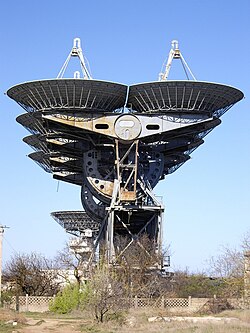 Relying upon high powered terrestrial radars (of up to one MW<ref>{{#invoke:citation/CS1|citation |CitationClass=web }}</ref>) radio astronomy is able to provide extremely accurate astrometric information on the structure, composition and movement of solar objects.<ref>{{#invoke:citation/CS1|citation |CitationClass=web }}</ref> This aids in forming long-term predictions of asteroid-Earth impacts, as illustrated by the object 99942 Apophis. In particular, optical observations measure where an object appears in the sky, but cannot measure the distance with great accuracy (relying on Parallax becomes more difficult when objects are small or poorly illuminated). Radar, on the other hand, directly measures the distance to the object (and how fast it is changing). The combination of optical and radar observations normally allows the prediction of orbits at least decades, and sometimes centuries, into the future.

There are two radar astronomy facilities that are in regular use, the Arecibo Planetary Radar and the Goldstone Solar System Radar.