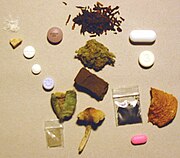 An arrangement of psychoactive drugs

The field of psychopharmacology studies a wide range of substances with various types of psychoactive properties, focusing primarily on the chemical interactions with the brain.

Psychoactive drugs interact with particular target sites or receptors found in the nervous system to induce widespread changes in physiological or psychological functions. The specific interaction between drugs and their receptors is referred to as "drug action", and the widespread changes in physiological or psychological function is referred to as "drug effect". These drugs may originate from natural sources such as plants and animals, or from artificial sources such as chemical synthesis in the laboratory.