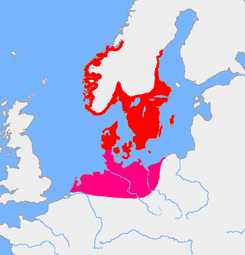 Map of the Pre-Roman Iron Age culture(s) associated with Proto-Germanic, c. 500 BC. The red area shows the areal of the preceding Nordic Bronze Age in Scandinavia; the magenta-colored area towards the south represents the Jastorf culture of the North German Plain.

The defining feature of Proto-Germanic is the completion of the First Germanic Sound Shift. As it is probable that the development of this sound law spanned a considerable time (several centuries), Proto-Germanic cannot adequately be reconstructed as a simple node in a tree model but rather represents a phase of development that may span close to a thousand years. The end of the Common Germanic period is reached with the beginning of the Germanic migrations in the 4th century.

The Proto-Germanic language is not directly attested by any coherent surviving texts; it has been reconstructed using the comparative method. Fragmentary direct attestation of (late) Common Germanic in early runic inscriptions (specifically the 2nd-century Vimose inscriptions and the 2nd-century BC Negau helmet inscription),<ref name="Comrie">{{#invoke:citation/CS1|citation |CitationClass=book }}</ref> and in Roman Empire era transcriptions of individual words (notably in Tacitus' Germania, c. AD 90<ref> this includes common nouns such as framea "spear, javelin", mythological characters such as Mannus and tribal names such as Ingaevones</ref>).