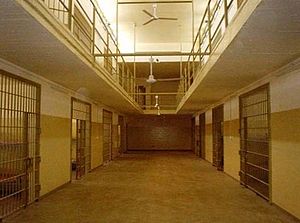 A prison,Unknown extension tag "ref" correctional facility, penitentiary, gaol (Ireland, England, Scotland, Wales), or jailUnknown extension tag "ref" is a facility in which inmates are forcibly confined and denied a variety of freedoms under the authority of the state as a form of punishment. The most common use of prisons is as part of a criminal justice system, in which individuals officially charged with or convicted of crimes are confined to a jail or prison until they are either brought to trial to determine their guilt or complete the period of incarceration they were sentenced to after being found guilty at their trial. Outside of their use for punishing civil crimes, authoritarian regimes also frequently use prisons and jails as tools of political repression to punish political crimes, often without trial or other legal due process; this use is illegal under most forms of international law governing fair administration of justice. In times of war, prisoners of war or detainees may also be detained in military prisons or prisoner of war camps, and large groups of civilians might be imprisoned in internment camps.