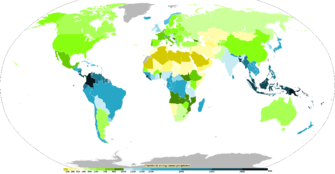 In meteorology, precipitation is any product of the condensation of atmospheric water vapour that falls under gravity.<ref>{{#invoke:citation/CS1|citation |CitationClass=web }}</ref> The main forms of precipitation include drizzle, rain, sleet, snow, graupel and hail. Precipitation occurs when a portion of the atmosphere becomes saturated with water vapour, so that the water condenses and "precipitates". Thus, fog and mist are not precipitation but suspensions, because the water vapour does not condense sufficiently to precipitate. Two processes, possibly acting together, can lead to air becoming saturated: cooling the air or adding water vapour to the air. Precipitation forms as smaller droplets coalesce via collision with other rain drops or ice crystals within a cloud.

Moisture overriding associated with weather fronts is an overall major method of precipitation production. If enough moisture and upward motion is present, precipitation falls from convective clouds such as cumulonimbus and can organize into narrow rainbands. Where relatively warm water bodies are present, for example due to water evaporation from lakes, lake-effect snowfall becomes a concern downwind of the warm lakes within the cold cyclonic flow around the backside of extratropical cyclones. Lake-effect snowfall can be locally heavy. Thundersnow is possible within a cyclone's comma head and within lake effect precipitation bands. In mountainous areas, heavy precipitation is possible where upslope flow is maximized within windward sides of the terrain at elevation. On the leeward side of mountains, desert climates can exist due to the dry air caused by compressional heating. The movement of the monsoon trough, or intertropical convergence zone, brings rainy seasons to savannah climes.

Precipitation may occur on other celestial bodies, e.g. when it gets cold, Mars has precipitation which most likely takes the form of ice needles, rather than rain or snow.<ref name="mars">{{#invoke:citation/CS1|citation |CitationClass=web }}</ref>