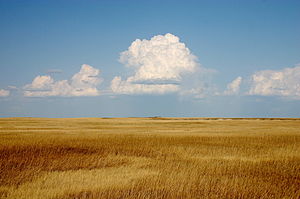 Prairie, Badlands National Park, South Dakota, USA, is in the mixed grasslands region containing some species of tall grass and some of short grass

Prairies are ecosystems considered part of the temperate grasslands, savannas, and shrublands biome by ecologists, based on similar temperate climates, moderate rainfall, and a composition of grasses, herbs, and shrubs, rather than trees, as the dominant vegetation type. Temperate grassland regions include the Pampas of Argentina, Brazil and Uruguay as well as the steppes of Eurasia. Lands typically referred to as "prairie" tend to be in North America. The term encompasses the area referred to as the Interior Lowlands of Canada, the United States, and Mexico, which includes all of the Great Plains as well as the wetter, somewhat hillier land to the east. In the U.S., the area is constituted by most or all of the states of North Dakota, South Dakota, Nebraska, Kansas, and Oklahoma, and sizable parts of the states of Montana, Wyoming, Colorado, New Mexico, Texas, Missouri, Iowa, Illinois, Ohio, Indiana, Wisconsin, and western and southern Minnesota. The Central Valley of California is also a prairie. The Canadian Prairies occupy vast areas of Manitoba, Saskatchewan, and Alberta.