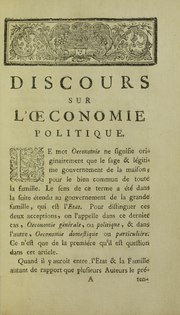 Political economy was a term used for studying production and trade, and their relations with law, custom, and government, as well as with the distribution of national income and wealth. Political economy originated in moral philosophy. It was developed in the 18th century as the study of the economies of states, or polities, hence the term political economy.

In the late 19th century, the term economics came to replace political economy, coinciding with the publication of an influential textbook by Alfred Marshall in 1890.<ref>Marshall, Alfred. (1890) Principles of Economics.</ref> Earlier, William Stanley Jevons, a proponent of mathematical methods applied to the subject, advocated economics for brevity and with the hope of the term becoming "the recognised name of a science."<ref>Jevons, W. Stanley. The Theory of Political Economy, 1879, 2nd ed. p. xiv.</ref><ref name="Groenwegen">Groenwegen, Peter. (1987 [2008]). "'political economy' and 'economics'", The New Palgrave: A Dictionary of Economics, v. 3, pp. 905-06. [Pp. 904–07.]</ref>

Today, political economy, where it is not used as a synonym for economics, may refer to very different things, including Marxian analysis, applied public-choice approaches emanating from the Chicago school and the Virginia school, or simply the advice given by economists to the government or public on general economic policy or on specific proposals.<ref name="Groenwegen"/> A rapidly growing mainstream literature from the 1970s has expanded beyond the model of economic policy in which planners maximize utility of a representative individual toward examining how political forces affect the choice of economic policies, especially as to distributional conflicts and political institutions.<ref name="Alesina">Alesina, Alberto F. (2007:3) "Political Economy," NBER Reporter, pp. 1-5. Abstract-linked-footnotes version.</ref> It is available as an area of study in certain colleges and universities.