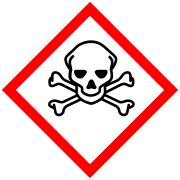 The GHS pictogram for poisonous substances. The skull and crossbones has long been a standard symbol for poison.

In biology, poisons are substances which cause disturbances to organisms, usually by chemical reaction or other activity on the molecular scale, when a sufficient quantity is absorbed by an organism.<ref>"poison" at Dorland's Medical Dictionary </ref><ref>"Poison" at Merriam-Webster. Retrieved December 26th, 2014.</ref> The fields of medicine (particularly veterinary) and zoology often distinguish a poison from a toxin, and from a venom. Toxins are poisons produced by organisms in nature, and venoms are toxins which are injected by a bite or sting (this is exclusive to animals). Note that the differentiator between venom and other poisons is the method of delivery.

Substances known as poisons may be used in industry, agriculture and other sectors for reasons other than their toxicity. Pesticides are one group of substances whose toxicity is their prime purpose.