Artist's rendition of the Earth's plasma fountain, showing oxygen, helium, and hydrogen ions that gush into space from regions near the Earth's poles. The faint yellow area shown above the north pole represents gas lost from Earth into space; the green area is the aurora borealis, where plasma energy pours back into the atmosphere.<ref>Plasma fountain Source, press release: Solar Wind Squeezes Some of Earth's Atmosphere into Space</ref>

Plasma parameters can take on values varying by many orders of magnitude, but the properties of plasmas with apparently disparate parameters may be very similar (see plasma scaling). The following chart considers only conventional atomic plasmas and not exotic phenomena like quark gluon plasmas: 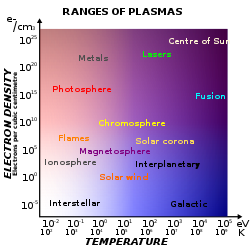 For plasma to exist, ionization is necessary. The term "plasma density" by itself usually refers to the "electron density", that is, the number of free electrons per unit volume. The degree of ionization of a plasma is the proportion of atoms that have lost or gained electrons, and is controlled mostly by the temperature. Even a partially ionized gas in which as little as 1% of the particles are ionized can have the characteristics of a plasma (i.e., response to magnetic fields and high electrical conductivity). The degree of ionization, <math>\alpha</math>, is defined as <math>\alpha = \frac{n_i}{n_i + n_n}</math>, where <math>n_i</math> is the number density of ions and <math>n_n</math> is the number density of neutral atoms. The electron density is related to this by the average charge state <math>\langle Z\rangle</math> of the ions through <math>n_e = \langle Z\rangle n_i</math>, where <math>n_e</math> is the number density of electrons.

Plasma temperature is commonly measured in kelvins or electronvolts and is, informally, a measure of the thermal kinetic energy per particle. Very high temperatures are usually needed to sustain ionization, which is a defining feature of a plasma. The degree of plasma ionization is determined by the electron temperature relative to the ionization energy (and more weakly by the density), in a relationship called the Saha equation. At low temperatures, ions and electrons tend to recombine into bound states—atoms<ref name="Nicholson">{{#invoke:citation/CS1|citation |CitationClass=book }}</ref>—and the plasma will eventually become a gas.

In most cases the electrons are close enough to thermal equilibrium that their temperature is relatively well-defined, even when there is a significant deviation from a Maxwellian energy distribution function, for example, due to UV radiation, energetic particles, or strong electric fields. Because of the large difference in mass, the electrons come to thermodynamic equilibrium amongst themselves much faster than they come into equilibrium with the ions or neutral atoms. For this reason, the ion temperature may be very different from (usually lower than) the electron temperature. This is especially common in weakly ionized technological plasmas, where the ions are often near the ambient temperature.

A plasma is sometimes referred to as being "hot" if it is nearly fully ionized, or "cold" if only a small fraction (for example 1%) of the gas molecules are ionized, but other definitions of the terms "hot plasma" and "cold plasma" are common. Even in a "cold" plasma, the electron temperature is still typically several thousand degrees Celsius. Plasmas utilized in "plasma technology" ("technological plasmas") are usually cold plasmas in the sense that only a small fraction of the gas molecules are ionized. 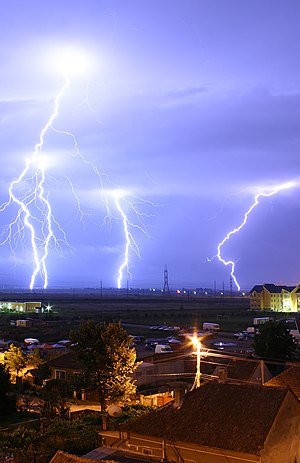 Since plasmas are very good electrical conductors, electric potentials play an important role. The potential as it exists on average in the space between charged particles, independent of the question of how it can be measured, is called the "plasma potential", or the "space potential". If an electrode is inserted into a plasma, its potential will generally lie considerably below the plasma potential due to what is termed a Debye sheath. The good electrical conductivity of plasmas makes their electric fields very small. This results in the important concept of "quasineutrality", which says the density of negative charges is approximately equal to the density of positive charges over large volumes of the plasma (<math>n_e = \langle Z\rangle n_i</math>), but on the scale of the Debye length there can be charge imbalance. In the special case that double layers are formed, the charge separation can extend some tens of Debye lengths.

The magnitude of the potentials and electric fields must be determined by means other than simply finding the net charge density. A common example is to assume that the electrons satisfy the Boltzmann relation:

Differentiating this relation provides a means to calculate the electric field from the density:

It is possible to produce a plasma that is not quasineutral. An electron beam, for example, has only negative charges. The density of a non-neutral plasma must generally be very low, or it must be very small, otherwise it will be dissipated by the repulsive electrostatic force.

In astrophysical plasmas, Debye screening prevents electric fields from directly affecting the plasma over large distances, i.e., greater than the Debye length. However, the existence of charged particles causes the plasma to generate, and be affected by, magnetic fields. This can and does cause extremely complex behavior, such as the generation of plasma double layers, an object that separates charge over a few tens of Debye lengths. The dynamics of plasmas interacting with external and self-generated magnetic fields are studied in the academic discipline of magnetohydrodynamics.

Comparison of plasma and gas phases

Plasma is often called the fourth state of matter after solid, liquids and gases.<ref>Yaffa Eliezer, Shalom Eliezer, The Fourth State of Matter: An Introduction to the Physics of Plasma, Publisher: Adam Hilger, 1989, ISBN 978-0-85274-164-1, 226 pages, page 5</ref><ref>{{#invoke:citation/CS1|citation |CitationClass=book }}</ref> It is distinct from these and other lower-energy states of matter. Although it is closely related to the gas phase in that it also has no definite form or volume, it differs in a number of ways, including the following: