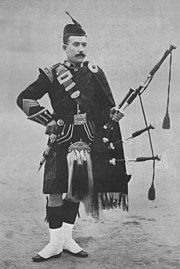 An early photograph of a Pipe Major of the Argyll and Sutherland Highlanders.

The pipe major is the leading musician of a pipe band, whether military or civilian. Like the appointment of drum major, the position is derived from British Army traditions. During the early twentieth century, the term sergeant piper was used instead. The pipe major is often assisted by a pipe sergeant, who has similar duties in the band and leads the band in the absence of the pipe major.

The pipe major leads the band musically, providing the rhythm by tapping his foot. Whilst marching, the pipe major is normally at the front right of the band.