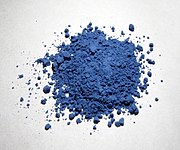 A pigment is a material that changes the color of reflected or transmitted light as the result of wavelength-selective absorption. This physical process differs from fluorescence, phosphorescence, and other forms of luminescence, in which a material emits light.

Many materials selectively absorb certain wavelengths of light. Materials that humans have chosen and developed for use as pigments usually have special properties that make them ideal for coloring other materials. A pigment must have a high tinting strength relative to the materials it colors. It must be stable in solid form at ambient temperatures.

For industrial applications, as well as in the arts, permanence and stability are desirable properties. Pigments that are not permanent are called fugitive. Fugitive pigments fade over time, or with exposure to light, while some eventually blacken.

Pigments are used for coloring paint, ink, plastic, fabric, cosmetics, food and other materials. Most pigments used in manufacturing and the visual arts are dry colorants, usually ground into a fine powder. This powder is added to a binder (or vehicle), a relatively neutral or colorless material that suspends the pigment and gives the paint its adhesion.

A distinction is usually made between a pigment, which is insoluble in its vehicle (resulting in a suspension), and a dye, which either is itself a liquid or is soluble in its vehicle (resulting in a solution). A colorant can act as either a pigment or a dye depending on the vehicle involved. In some cases, a pigment can be manufactured from a dye by precipitating a soluble dye with a metallic salt. The resulting pigment is called a lake pigment. The term biological pigment is used for all colored substances independent of their solubility.

In 2006, around 7.4 million tons of inorganic, organic and special pigments were marketed worldwide. Asia has the highest rate on a quantity basis followed by Europe and North America. By 2020, revenues will have risen to approx. US$34.2 billion<ref>[1] Market Study Pigments, 3rd ed., Ceresana, 11/13</ref> The global demand on pigments was roughly US$ 20.5 billion in 2009, around 1.5-2% up from the previous year. It is predicted to increase in a stable growth rate in the coming years. The worldwide sales are said to increase up to US$ 24.5 billion in 2015, and reach US$ 27.5 billion in 2018.<ref>{{#invoke:citation/CS1|citation |CitationClass=web }}</ref>