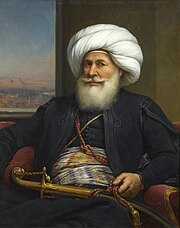 Pasha or pascha (, Turkish: paşa{{#invoke:Category handler|main}}), formerly anglicized as bashaw, was a higher rank in the Ottoman Empire political and military system, typically granted to governors, generals and dignitaries and others. As an honorary title, Pasha, in one of its various ranks, is similar to a British peerage or knighthood, and was also one of the highest titles in pre-republican Egypt. There were three ranks of pashas: the first, or highest class, had the privilege of bearing a standard of three horse-tails, the second of two, and the third of one.<ref name="pires">The empires and cities of Asia (1873) by Forbes, A. Gruar. Page 188</ref>