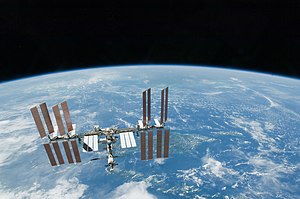 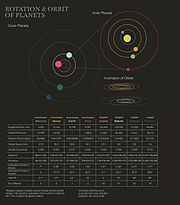 Two bodies of different mass orbiting a common barycenter. The relative sizes and type of orbit are similar to the Pluto–Charon system.

In physics, an orbit is the gravitationally curved path of an object around a point in space, for example the orbit of a planet around the center of a star system, such as the Solar System.<ref>The Space Place :: What's a Barycenter</ref><ref>orbit (astronomy) – Britannica Online Encyclopedia</ref> Orbits of planets are typically elliptical, but unlike the ellipse followed by a pendulum or an object attached to a spring, the central object is at a focal point of the ellipse and not at its center.

Current understanding of the mechanics of orbital motion is based on Albert Einstein's general theory of relativity, which accounts for gravity as due to curvature of space-time, with orbits following geodesics. For ease of calculation, relativity is commonly approximated by the force-based theory of universal gravitation based on Kepler's laws of planetary motion.<ref>Kuhn, The Copernican Revolution, pp. 238, 246–252</ref>