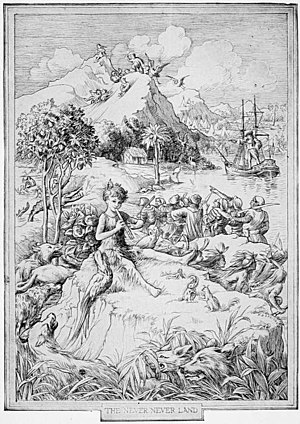 Illustration of Peter Pan playing the pipes, with Neverland in the background by F. D. Bedford, from the novel Peter and Wendy published in 1911.

Neverland is a fictional location featured in the works of J. M. Barrie and those based on them. It is the dwelling place of Peter Pan, Tinker Bell, the Lost Boys and others. Although not all people in Neverland cease to age, its best known resident famously refused to grow up, and it is often used as a metaphor for eternal childhood (and childishness), immortality, and escapism. It was first introduced as "the Never Never Land" in the theatre play Peter Pan, or The Boy Who Wouldn't Grow Up by Scottish writer J. M. Barrie, first staged in 1904.

In his 1911 novelization Peter and Wendy, Barrie referred to "the Neverland", and its many variations "the Neverlands".<ref Name="PeterandWendy">{{#invoke:citation/CS1|citation |CitationClass=book }}</ref> In the earliest drafts of Barrie's play, the island was called "Peter's Never Never Never Land", a name possibly influenced by "the Never Never", a contemporary term for outback Australia. In the 1928 published version of the script, it was shortened to "the Never Land". Neverland has been featured prominently in subsequent works, either adapting Barrie's works or expanding upon them. These Neverlands sometimes vary in nature from the original.