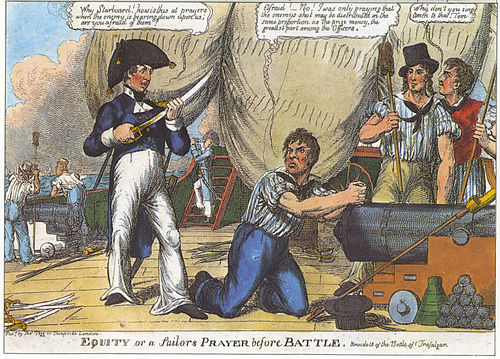 A 19th century cartoon portraying ratings on a Royal Navy ship. The man with a sword is a commissioned officer, as is the man on the ladder with the telescope. All others are ratings.

A naval rating is an enlisted member of a country's navy, subordinate to warrant officers and officers hence not conferred by commission or warrant. The naval term comes from the general nautical usage of rating - a seaman's class or grade as recorded in the ship's books,<ref>New English Dictionary, p. 886</ref> whilst in the United States it is currently used to denote a sailor's occupational specialty.<ref>{{#invoke:citation/CS1|citation |CitationClass=web }}</ref>

The system of conferring authority on sailors in the Royal Navy and elsewhere evolved through the recognition of competence; Landsman, Ordinary seaman or Able seaman and through the appointment of authority as a petty officer.

Historically the term rate also applied to ships, denoting their combat strength by the number, and type, of guns.

The general structure now used in the majority of countries breaks down into four major groupings: