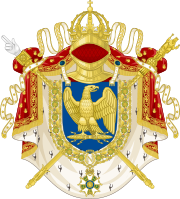 Napoléon Bonaparte ({{#invoke:IPAc-en|main}};<ref>"Napoleon". Random House Webster's Unabridged Dictionary.</ref> French: [napɔleɔ̃ bɔnapaʁt], born Napoleone di Buonaparte; 15 August 1769 – 5 May 1821) was a French military and political leader who rose to prominence during the French Revolution and led several successful campaigns during the Revolutionary Wars. As Napoleon I, he was Emperor of the French from 1804 until 1814, and again in 1815. Napoleon dominated European affairs for over a decade while leading France against a series of coalitions in the Napoleonic Wars. He won most of these wars and the vast majority of his battles, rapidly gaining control of continental Europe before his ultimate defeat in 1815. One of the greatest commanders in history, his campaigns are studied at military schools worldwide and he remains one of the most celebrated and controversial political figures in Western history.<ref name="Roberts, Andrew 2014">Roberts, Andrew. Napoleon: A Life. Penguin Group, 2014, Introduction.</ref><ref>{{#invoke:citation/CS1|citation |CitationClass=book }}</ref> In civil affairs, Napoleon had a major long-term impact by bringing liberal reforms to the countries that he conquered, especially the Low Countries, Switzerland, Italy, and large parts of Germany. He implemented fundamental liberal policies in France and throughout Western Europe.Unknown extension tag "ref" His lasting legal achievement was the Napoleonic Code, which has been adopted in various forms by a quarter of the world's legal systems, from Japan to Quebec.{{#invoke:Footnotes|sfn}}<ref name="Napoleon 2014">The ideas that underpin our modern world—meritocracy, equality before the law, property rights, religious toleration, modern secular education, sound finances, and so on—were championed, consolidated, codified and geographically extended by Napoleon. To them he added a rational and efficient local administration, an end to rural banditry, the encouragement of science and the arts, the abolition of feudalism and the greatest codification of laws since the fall of the Roman Empire. Andrew Roberts, Napoleon: A Life (2014), p. xxxiii.</ref><ref name="scholarship.law.cornell.edu">Xavier Blanc-Jouvan, Worldwide Influence of the French Civil Code of 1804, on the Occasion of its Bicentennial Celebration [1]</ref>

Napoleon was born in Corsica to a relatively modest family of noble Tuscan ancestry. Serving in the French army, Napoleon supported the Revolution from the outset in 1789 and tried to spread its ideals to Corsica, but was banished from the island in 1793. Two years later, he saved the French government from collapse by firing on the Parisian mobs with cannons. After the Directory rewarded Napoleon by giving him command of Army of Italy at age 26, he began his first military campaign against the Austrians and their Italian allies, scoring a series of decisive victories that made him famous all across Europe. He followed the defeat of the Allies in Europe by commanding a military expedition to Egypt in 1798, conquering the Ottoman province after defeating the Mamelukes and launching modern Egyptology through the discoveries made by his army.

After returning from Egypt, Napoleon engineered a coup in November 1799 and became First Consul of the Republic. With the Concordat of 1801, Napoleon restored the religious powers of the Catholic Church but kept the lands seized by the Revolution. The state nominated the bishops and controlled church finances. He extended his political control over France until the Senate declared him Emperor of the French in 1804, launching the French Empire. Intractable differences with the British meant that the French were facing a Third Coalition by 1805. Napoleon shattered this coalition with decisive victories in the Ulm Campaign and a historic triumph at the Battle of Austerlitz, which led to the elimination of the Holy Roman Empire. In October 1805, however, a Franco-Spanish fleet was destroyed at the Battle of Trafalgar, allowing Britain to impose a naval blockade of the French coasts. In retaliation, Napoleon established the Continental System in 1806 to cut off European trade with Britain. The Fourth Coalition took up arms against him the same year because Prussia became worried about growing French influence on the continent. After quickly knocking out Prussia at the battles of Jena and Auerstedt, Napoleon turned his attention towards the Russians and annihilated them in 1807 at Friedland, which forced the Russians to accept the Treaties of Tilsit, the high water mark of the French Empire.

Hoping to extend the Continental System, Napoleon invaded Iberia and declared his brother Joseph the King of Spain in 1808. The Spanish and the Portuguese revolted with British support. The Peninsular War, noted for its brutal guerrilla warfare, lasted six years and culminated in an Allied victory. Fighting also erupted in Central Europe, as the Austrians launched another attack against the French in 1809. Napoleon defeated them at the Battle of Wagram, dissolving the Fifth Coalition formed against France. By 1811, Napoleon ruled over 70 million people across an empire that had domination in Europe, which had not witnessed this level of political consolidation since the days of the Roman Empire.{{#invoke:Footnotes|sfn}} He maintained his strategic status through a series of alliances and family appointments. He created a new aristocracy in France while allowing the return of nobles who had been forced into exile by the Revolution.

Tensions over rising Polish nationalism and the economic effects of the Continental System led to renewed confrontation with Russia. To enforce his blockade, Napoleon launched an invasion of Russia in 1812 that ended in catastrophic failure for the French. In 1813, Prussia and Austria joined Russian forces in a Sixth Coalition against France. A chaotic military campaign eventually culminated in a large Allied army defeating Napoleon at the Battle of Leipzig in October. The next year, the Allies invaded France and captured Paris, forcing Napoleon to abdicate in April 1814. He was exiled to the island of Elba. The Bourbons were restored to power and the French lost most of the territories that they had conquered since the Revolution. However, Napoleon escaped from Elba in February 1815 and took control of the government once again. The Allies formed a Seventh Coalition, which ultimately defeated Napoleon at the Battle of Waterloo in June. He was then captured by the British and imprisoned on the remote island of Saint Helena. His death in 1821 at the age of 51 was received by shock and grief throughout Europe. In 1840, a million people witnessed his remains returning to Paris, where they still reside at Les Invalides.<ref>Roberts, A. Napoleon: A Life. Penguin Group, 2014, p. 801.</ref>