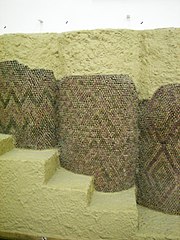 Cone mosaic courtyard from Uruk in Mesopotamia 3000 BC

Mosaic is the art of creating images with an assemblage of small pieces of colored glass, stone, or other materials. It is a technique of decorative art or interior decoration. Most mosaics are made of small, flat, roughly square, pieces of stone or glass of different colors, known as tesserae; but some, especially floor mosaics, may also be made of small rounded pieces of stone, and called "pebble mosaics".

Mosaic has a long history, starting in Mesopotamia in the 3rd millennium BC. Pebble mosaics were made in Tiryns in Mycenean Greece; mosaics with patterns and pictures became widespread in classical times, both in Ancient Greece and Ancient Rome. Early Christian basilicas from the 4th century onwards were decorated with wall and ceiling mosaics. Mosaic art flourished in the Byzantine Empire from the 6th to the 15th centuries; that tradition was adopted by the Norman kingdom in Sicily in the 12th century, by eastern-influenced Venice, and among the Rus in Ukraine. Mosaic fell out of fashion in the Renaissance, though artists like Raphael continued to practise the old technique. Roman and Byzantine influence led Jews to decorate 5th and 6th century synagogues in the Middle East with floor mosaics.

Mosaic was widely used on religious buildings and palaces in early Islamic art, including Islam's first great religious building, the Dome of the Rock in Jerusalem, and the Umayyad Mosque in Damascus. Mosaic went out of fashion in the Islamic world after the 8th century.

Modern mosaics are made by professional artists, street artists, and as a popular craft. Many materials other than traditional stone and ceramic tesserae may be employed, including shells, glass and beads.