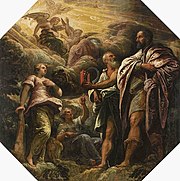 Allegory with a portrait of a Venetian senator (Allegory of the morality of earthly things), attributed to Tintoretto, 1585

Morality (from the Latin moralitas{{#invoke:Category handler|main}} "manner, character, proper behavior") is the differentiation of intentions, decisions, and actions between those that are distinguished as proper and those that are improper: In other words, it is the disjunction between right and wrong.<ref name="THP">{{#invoke:citation/CS1|citation |CitationClass=book }}</ref> Morality can be a body of standards or principles derived from a code of conduct from a particular philosophy, religion, or culture, or it can derive from a standard that a person believes should be universal.<ref>{{#invoke:citation/CS1|citation |CitationClass=web }}</ref> Morality may also be specifically synonymous with "goodness" or "rightness."

Moral philosophy includes moral ontology, or the origin of morals, as well as moral epistemology, or what is known about morals. Different systems of expressing morality have been proposed, including deontological ethical systems which adhere to a set of established rules, and normative ethical systems which consider the merits of actions themselves. An example of normative ethical philosophy is the Golden Rule which states that, "One should treat others as one would like others to treat oneself."<ref name = "Flew"> This dictionary of philosophy contains the following under the entry for "golden rule": "The maxim 'Treat others how you wish to be treated'. Various expressions of this fundamental moral rule are to be found in tenets of most religions and creeds through the ages, testifying to its universal applicability." Walter Terence Stace argued that the Golden Rule is much more than simply an ethical code. He posits that it "express[es] the essence of a universal morality." The rationale for this distinction occupies much of his book The Concept of Morals (1937). {{#invoke:citation/CS1|citation |CitationClass=book }}</ref>