{{#invoke:Hatnote|hatnote}} A monarchy is a form of government in which sovereignty is actually or nominally embodied in one or several individual(s) reigning until death or abdication. They are called the monarchs.<ref>Stuart Berg Flexure and Lenore Carry Hack, editors, Random House Unabridged Dictionary, 2nd Ed., Random House, New York (1993)</ref> Forms of monarchy differ widely based on the level of legal autonomy the monarch holds in governance, the method of selection of the monarch, and any predetermined limits on the length of their tenure. When the monarch has no or few legal restraints in state and political matters, it is called an absolute monarchy and is a form of autocracy. Cases in which the monarch's discretion is formally limited are called constitutional monarchies. In hereditary monarchies, the office is passed through inheritance within a family group, whereas elective monarchies use some system of voting. Each of these has variations: in some elected monarchies only those of certain pedigrees are eligible, whereas many hereditary monarchies impose requirements regarding the religion, age, gender, mental capacity, and other factors. Occasionally this might create a situation of rival claimants whose legitimacy is subject to effective election. Finally, there have been cases where the term of a monarch’s reign is either fixed in years or continues until certain goals are achieved: an invasion being repulsed, for instance. Thus there are widely divergent structures and traditions defining monarchy. 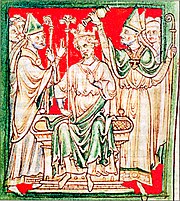 Richard I of England being anointed during his coronation in Westminster Abbey, from a 13th-century chronicle.

Monarchy was the most common form of government until the 19th century, but it is no longer prevalent. Where it exists, it is now usually a constitutional monarchy, in which the monarch retains a unique legal and ceremonial role, but exercises limited or no official political power: under the written or unwritten constitution, others have governing authority. Currently, 44 sovereign nations in the world have monarchs acting as heads of state, 16 of which are Commonwealth realms that recognise Queen Elizabeth II as their head of state. All European monarchies are constitutional ones, with the exception of the Vatican City which is an elective monarchy, but sovereigns in the smaller states exercise greater political influence than in the larger. The monarchs of Cambodia, Japan, and Malaysia "reign, but do not rule" although there is considerable variation in the degree of authority they wield. Although they reign under constitutions, the monarchs of Brunei, Morocco, Oman, Qatar, Saudi Arabia and Swaziland appear to continue to exercise more political influence than any other single source of authority in their nations, either by constitutional mandate or by tradition.