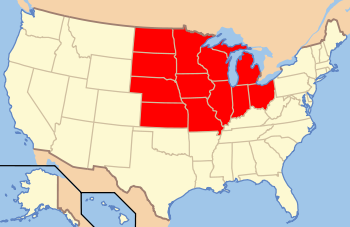 The Midwest as defined by the U.S. Census Bureau.

Though the region is traditionally defined in a number of ways, the Census Bureau's definition consists of 12 states in the north central United States: Illinois, Indiana, Iowa, Kansas, Michigan, Minnesota, Missouri, Nebraska, North Dakota, Ohio, South Dakota, and Wisconsin. Illinois is the most populous of the states and North Dakota the least. A 2012 report from the United States Census put the population of the Midwest at 65,377,684. The Midwest is divided by the Census Bureau into two divisions. The East North Central Division includes Illinois, Indiana, Michigan, Ohio and Wisconsin, all of which are also part of the Great Lakes region. The West North Central Division includes Iowa, Kansas, Minnesota, Missouri, North Dakota, Nebraska, and South Dakota, all of which, except for Iowa, Missouri and Minnesota, are located, at least partly, within the Great Plains region of the country. Major rivers in the region include, from east to west, the Ohio River, the Upper Mississippi River, and the Missouri River.

Economically the region is balanced between heavy industry and agriculture, with finance and services such as medicine and education becoming increasingly important. Its central location makes it a transportation crossroads for river boats, railroads, autos, trucks and airplanes. Politically the region swings back and forth between the parties, and thus is heavily contested and often decisive in elections.<ref>{{#invoke:citation/CS1|citation |CitationClass=book }}</ref><ref>{{#invoke:citation/CS1|citation |CitationClass=book }}</ref>

For decades after the sociological study by Robert Lynd and Helen Lynd Middletown appeared in 1929, commentators used Midwestern cities (and the Midwest generally) as "typical" of the nation. Middletown was Muncie, Indiana.<ref>Sisson (2006) pp. 69–73; Richard Jensen, "The Lynds Revisited," Indiana Magazine of History (December 1979) 75: 303–319</ref> The region has a higher employment-to-population ratio (the percentage of employed people at least 16 years old) than the Northeast, the West, the South, or the Sun Belt states as of 2011[update].<ref>{{#invoke:citation/CS1|citation |CitationClass=web }}</ref>